The specific area in which a bite is placed may appear random, yet this particular manoeuvre is not without its tactics. Full force biting is very different from nipping, as many owners of domestic horses could no doubt corroborate. It would be very unusual for any owner that has been around horses for many years to have not felt the gnashers of an equine on their skin.

My own gelding would periodically bite, and my bottom was always his favourite location. The bite was never hard enough to cause injury, or even a bruise, nonetheless hard enough to make me squeal, which probably pleased him greatly. Yet knowing the grievous injury that horses can inflict from biting, it is evident they know exactly how much force to apply, and in which area to apply it. In my case bottom biting always occurred in the stable. Bearing in mind he was usually a very mild, and gentle mannered horse, this behaviour was less about being dominant, and more to do with communication, and indicating his frustration at being in a box.

It is this behaviour which is more likely to be observed in domestic horses when at pasture. Biting is not always intensely aggressive, because at times a nip will suffice when instructing another horse to move, or when showing or confirming dominance. Bites are more often than not always on the rump, barrel and/or shoulder. Biting can also occur when a stallion intends to mount a mare in oestrus, before mounting and during mating. Therefore, it seems horses have several distinctive forms of biting, and for different reasons, depending on the situation. 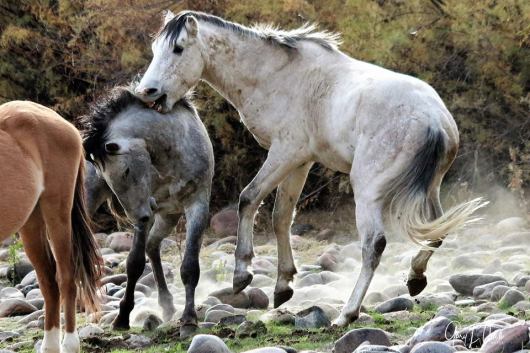 Full force biting is without a doubt severe aggression with the sole objective of causing grievous injury. Something has gone catastrophically wrong, and for a very long time, for a domesticated horse to do this to a human. To coin a phrase this would be a horse that has become so frustrated or confused by bad training and incorrect handling he has literally lost his shit. Recent or ongoing pain can also cause aggression. Usually however in these cases most attentive owners circumvent such an aggressive event occurring by treating or euthanizing the horse.

For non-domesticated horses, aggressive full force biting is usually seen between two battling stallions when either securing females or when attempting to keep them. The two main areas to inflict catastrophic injury are the neck/face area and the legs.  To be able to force a horse to the ground would be the ultimate way to show dominance. Horses as prey animals instinctively understand that being forced to the ground by a predator could potentially result in death. Moreover, if the legs are rendered useless, the horse loses the capacity to kick and defend itself, or even run away. 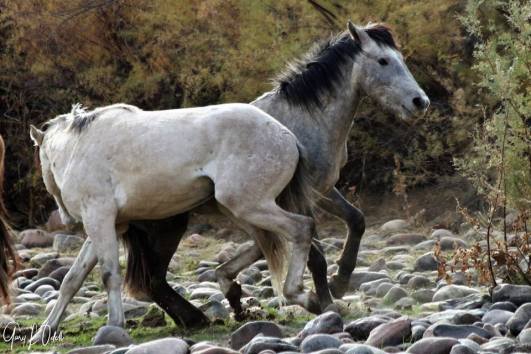 There are abundant images across the internet of horses sitting like a dog, or laying down. These are not comfortable horses, and it is far from cute. Many show the horse pinning its ears, and I can personally testify that even when instructing a trained horse to sit or lie, they pin their ears and demonstrate unwillingness. Laying down to sleep or rest is completely different, and is done through choice, and only when the horse feels the environment and situation are safe to do so. In general, horses do not like to be forced to lie on the ground!

Hence, a stallion can disarm his adversary, display his dominance and ultimately win the battle by successfully flooring the other horse. The floored horse could also find himself utterly defenceless in evading further attack from bites and kicks. As in part 2, the capacity to rear in order to avoid serious injury to the head is now absent, therefore the horse is defenceless. It is not just the pain of bitten knees and hocks that floors the horse, the actual victim bends the legs to avoid the bite also, in order to evade injury to the area. In the same way a horse will rear (in a fight situation) to both evade and inflict injury, horses will also drop to their haunches to protect their legs. Either way however, whether he has been forced to the ground through injury, or to protect himself from injury, he will at this stage have lost the fight. 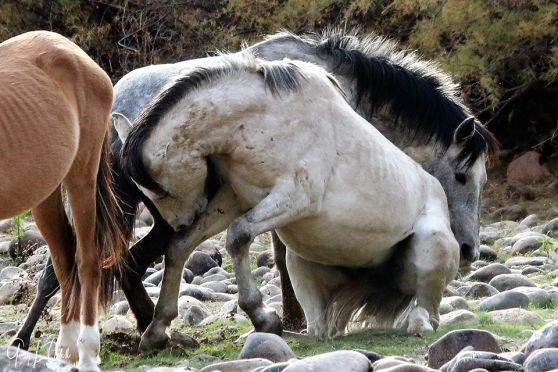 The only option at this point is the same with most animals, including humans, in that if fight didn’t work, the only option left is flight. Of course, anyone that has owned horses will have observed they are extremely adept at getting to their feet in a blink of an eye. Losing has its place in nature, and more often than not the horse will survive to fight another day, and gain more fighting experience with each battle. 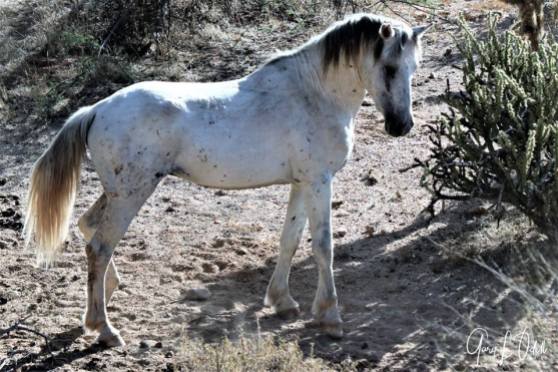 By now, and if my readers have read the previous 3 articles in this series, it should be accepted that a horse’s defences are used in different ways, depending on the situation and environment. It is an over simplification for a bite to be a bite, or a strike just to be a strike. The force used, the intention and the meaning can vary greatly. Therefore kicking with the hind legs also has multiple purposes, and is not always used to deliberately inflict damage.

The double barrel is a term used to describe a manoeuvre in which both back hooves leave the ground simultaneously in an upward and outward motion. While all kicks can cause catastrophic injuries, the double barrel could be the most lethal. Horses have several methods of kicking, yet this manoeuvre would be the most powerful of all of them. The rump of the horse is made up of several enormous deep and superficial muscle groups. These muscles can be utilised for both speed, and employing a kick while in motion i.e. cantering or galloping. This is completed by first powering their upper body off the ground to gain height without compromising forward momentum. During the downward motion of the leap the horse raises his rump to kick out. It is a fluid motion which allows the horse to utilise his defences while still moving at speed. Also of course, the double barrel can also be performed while the horse is stationary. 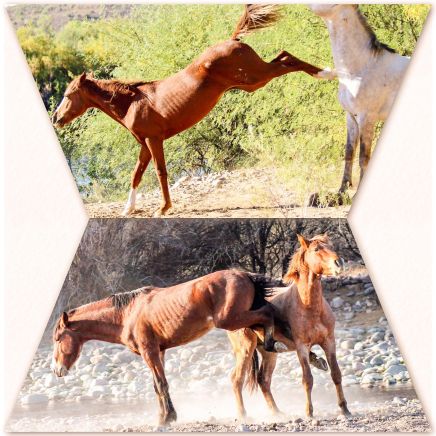 This manoeuvre can also be performed to demonstrate a warning. In this motion both back legs are brought up but are not fully extended outwards, but with the hooves staying vertically below the hocks. This is a threat, and owners of domesticated horses should read this as the horse saying Go Away. This brings us back to the earlier point in that horses do not always kick or bite to deliberately inflict damage. Horses are quite capable of discerning the level of threat, and responding with the appropriate level of defence. In most cases when a human is kicked it’s because they have not read, or missed, or even ignored the previous warnings and signals the horse has given out leading up to a kick. Horses can also kick as a warning or even a reprimand, yet again, with no intention of causing harm. Mares often reprimand an exuberant foal with a non-damaging kick, horses also give field mates a ‘slap’ to move another horse away. 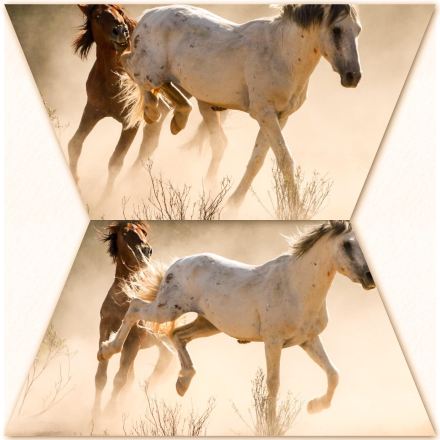 Unfortunately, humans are too feeble to withstand a warning kick, we break too easily. Of course there are cases where a horse has kicked a human to deliberately cause massive damage, but in some cases the horse is giving the human just a ‘slap’. Sadly the horse will be labelled as dangerous, and only because the human missed the signals. If anyone can survive a kick, then the horse never intended to kill that person in the first place, because if the intention was to kill…they would have been killed.

This is probably the most usual form of kicking that people are aware of, and is seen most often. The horse extends just one back leg, either with all three still on the ground, or as with the double barrel, lifting the hind-quarters off the ground but only extending one leg. Also, similar to the double barrel, this action can be performed either stationary or while in motion. Often favoured if the intended target is off to the side of the horse’s hind-quarters. While horses are agile enough to twist their back/pelvis to deliver a double barrel it’s unlikely the off side hoof will make contact due to the angle and position of the target. Quite often the double barrel is attempted but only one hoof hits the animal with the other hoof missing entirely, although this could also be intentional.

This manoeuvre is performed by one back hoof moving up, and forward towards the belly, or off to the side. This can be used in defence but it’s also a very useful motion to remove anything irritating from the underneath of the horse’s body i.e. biting insects/flies and vegetation such as burs or cacti. Horses often cow kick when showing symptoms of colic as the horse is aware something in that area is hurting him, so he attempts to remove it. This is not an early sign of colic however, if the horse is cow-kicking in pain because of colic, then potentially it’s already in the late stages.

It is a manoeuvre and it is for defence, but technically this type of kick is more to do with instinctive reaction, than an intentionally well aimed kick at a specifically chosen target. Moreover this is another reason novices, children, dogs and non-horsey people get kicked. Horses can kick out of surprise, they can quite literally do it in their sleep, in fact, a dozing relaxed horse is more likely to kick if surprised. Alert horses are fully aware of their surrounding and environment, and have already identified what is a threat or not. So for example, if an owner suddenly drops a bucket behind a relaxed horse this could potentially trigger the kick instinct. Touching a horse that hasn’t seen/heard someone coming can again result in the animal kicking from surprise. Horses can kick out merely by someone or another horse running by, and especially behind, them. 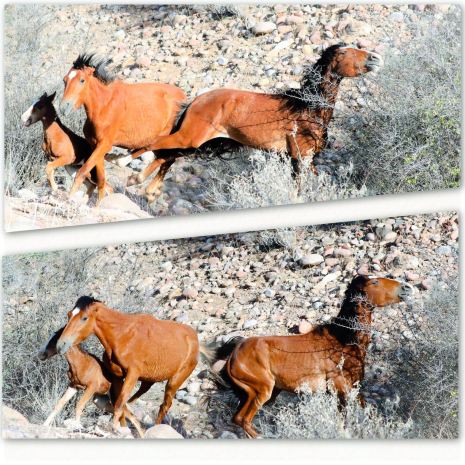 It’s likely the horse kicking out in this image is not doing so to inflict serious damage. It is either kicking out from surprise at the two horses running behind him, or he’s demonstrating disgruntlement at having his space invaded. There is but a narrow gap for the mare and foal to pass, but they do so anyway, and at their own risk. It could be that the foal has run ahead of mum, and she’s had no choice to also run past, in order to shield her foal from being kicked. It’s more likely however they both needed to pass this horse even with no room to spare so rushed through. I also know there is a water source nearby, and their intention was to reach it. Driven by this incentive, the danger of getting kicked is less than their need for water. Either way, the horse doing the kicking deliberately aims low, if this was full on aggression he could have, if chosen to, double barrelled the mare. Simply put, he’s punishing insubordinate behaviour with a slap, rather than intending to inflict serious injury.