Two winters ago, in a spirit of inquiry, I set off early to Camelford and then to the north side of Bodmin Moor. My aim was to walk up to the top of Rough Tor, which is just to the north of Bodmin Moor’s highest top of Brown Willy. I was looking for evidence of ecological disaster caused by upland farming, as described by George Monbiot. Early in the morning, there had been a massive hailstorm, so ice had to be cleared form the car before I set off. The ice persisted in many of the narrow lanes even as I neared my destination, despite the sunshine. And so, as I arrived in the car park next to a plantation of conifers and a small boundary plantation of young oaks, everything was wet and gleaming underfoot. The view in front of me towards Rough Tor, was one of an open grazed moor leading up to the broken granite top. A group of Galloway cattle grazed on the short turf. Behind me, I could hear the sound of an approaching vehicle. So could the cattle, who lifted their heads and began to bellow. Even though the vehicle was still out of site, the cattle knew it was the farmer, who duly appeared over the brow in a Land Rover laden with sacks of feed. He opened the gate and drove in and then went across the bottom end of the moor to the north-east and out of sight. The cattle followed. A line of Scottish Blackface sheep appeared and threaded their way across the moor, following the cattle. A minute or two later, some ponies appeared from high on the hill and followed the sheep. As I walked through the gate onto the moor, a Song Thrush sang from the oaks. 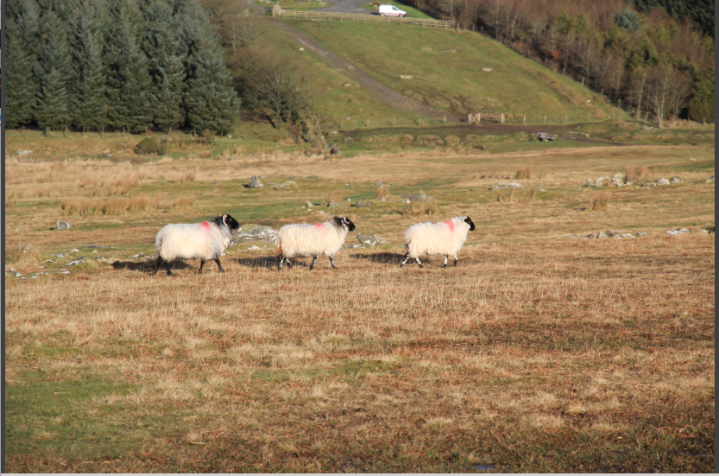 The grass was short turf interspersed with clumps of Nardus stricta  – Matt Grass. The clumps had been grazed tight – I suspected that this would be the work of the ponies. Apart from the occasional plantations of exotic conifers, the whole place was a vista of open and sweeping aspects. Monbiot would describe this as ‘sheep scoured’, ‘desolate’ and so on. It would send the poor man into deep depression. But as far as I was concerned, it was a beautiful sunny, if showery, late winter scene. The greens and browns of the turf  and tussocky grasses blended. Only the broken granite stones of ancient settlements broke the surface. As I walked up the hill, I crossed numerous lines of stones, many set upright like mini menhirs. The OS 1:25000 map describes these as ‘settlement’ and ‘cairns’, but it is clear that a long time ago, many people were very busy building and living in this bleak place.

As I neared the top of Rough Tor, a pair of Ravens rose into the air to check me out. Typically, I had chosen the more difficult route to the top and the granite slabs were slippery as I wibbled my way up. And then, of course, I managed to find a nice deep hole of peat and water in which to slide my right leg. The camera nearly got a dipping. 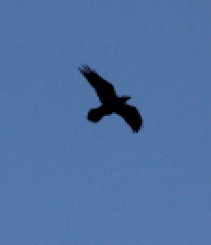 The great granite slabs, rounded by an ice age and millennia of wind and rain, sat balanced upon the Tor. In the distance was the sea on the coast of North Cornwall. Patches of water from reservoirs and old clay tailings dams gave patches of blue. All around was green at lower altitudes and then the dark green of the plantations dotting the upper landscape. Then there was the moor itself. Not a uniform green, but squared off patches, some of Nardus, some of short Fescues and clumps of Hard Rush Juncus inflexus. These enclosures were the work of ancient and more modern man, but over all these, the sheep roamed unhindered. As I looked to the south-east and at Brown Willy, the base of Willy himself was surrounded by ancient field systems. All around me was the evidence of Bronze Age human activity. About 4,500 years ago, this was a large community of people. Most likely, in the Neolithic period which ended 2,500 years BC, people had already cleared all the trees from the tops. This laid the foundations for their successors to begin agriculture and pastoralism with domesticated sheep in cultivated fields. At some later point, the climate changed for the worst and became pretty well what it is today – a lot wetter and colder. The Iron Age successors to these early pastoralists moved down the hill, now able to cut down trees with their iron implements and find the deeper, more forgiving soil of the lower altitudes. They left only a few hill farmers behind, who exploited what the hill can still provide – grass for sheep, cattle and ponies. The farmers are still there today.

I turned to look for an easier way down than the way I had come up and found a short stone staircase that led between great boulders. That staircase might be four thousand years old, built by the people who lived in the settlement near the top of the Tor. My cranky knees silently thanked them for their public-spirited foresight all those millennia ago. I slithered down to the saddle which separates Rough Tor from Showery Top and then turned North to amble down the gentle slope back to the car park. To my right, a Skylark sang briefly. This was not the tremulous chirrup of the massed winter flocks, but a short song of a solitary bird – a quiet rehearsal for the full magnificence of the breeding season. Then, from behind Showery Top came a musical cry and I looked up to see a flock of about fifty Golden Plover wheeling in the blue. They headed off north and I continued my gentle descent.

A few hundred yards from the plantation at the car park, three or four Carrion Crows were bouncing about in the little field systems. They were clearly feeding in the short turf upon invertebrates. To emphasise the point, a flock of thirty or so Starlings landed on the same patch and began to forage busily. They took off and joined another flock and landed again to thunder across the turf in a crescent, jabbing and whistling as they went. If the worms did come out voluntarily to be eaten, then they could be frightened out by the advancing cacophony above them.

As I neared the plantation I could hear an early Robin singing and the short song of a Chaffinch. A small flock of Wigeon paddled about in the stream. The plantation provided a habitat for the crows and the woodland birds. But the crows’ forays into the surrounding moorland shows how treacherous these alien trees can be when dumped into the middle of a landscape which has been a home for waders for thousands of years. This was as neat a demonstration of the edge effect as you could wish for. The crows near the plantation were replaced by the Ravens who guarded the Tor. The landscape was not empty, but busy with life. 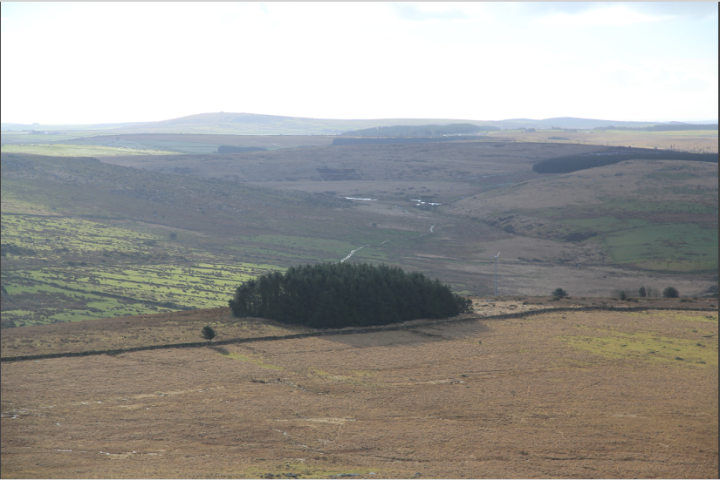 A small flock of naughty young Blackface escapees scooted off the road as I drove back up the lane. A field to my left had a few ewes and the first cross-bred lambs of the year. The field on my right was very short cropped and full of pregnant ewes. The flock of fifty Golden Plover I had seen earlier, had joined some others and they now numbered two or three hundred. They took off from feeding amongst the ewes and wheeled around. Golden Plover like to take off and do some freestyle formation flying. Only in the depths of a snowy winter do they sit and sulk in a field before moving off south to warmer places. But this field they had been feeding in was clearly full of invertebrates, even though it looked skinhead-shorn by the sheep.

I had come looking for environmental and ecological devastation and found great, open beauty that had endured for thousands of years, kept alive by the very grazing pressure so hated by George Monbiot and his metropolitan acolytes. You could argue, and I would  agree, that more could be done to increase the numbers of birds breeding on these open spaces. It is likely that by altering the grazing pressure a little – a few more cattle and fewer sheep – that within three or four years the clump-forming grasses would recover, the shorter grasses might grow a bit longer and  some of the species which are still declining in our uplands, would increase again. We do not know for certain, because too little scientific work has been done to answer this question. We know for certain that control of predators, like the Carrion Crows I saw yesterday, will improve breeding success. But what should not happen is that grazing is withdrawn and the landscape neglected, fenced off and called ‘conservation’ or ‘rewilding’. That will destroy these beautiful places as certainly as planting alien conifers upon it. It will drive out the wonderful species which depend upon the invertebrates and short grasses – all of whom rely upon the cropping and manuring by domesticated animals. It will also bury the archeology which created the landscape in the first place.

And we humans will have lost our connection with some of our own origins.

©David Eyles 28th Feb 2017 – Brown Willy from Rough Tor. As it always has been for four thousand years – grazed by sheep and cattle.

David Eyles spent the first twenty years of his career as a quantity surveyor in civil engineering. He started work on the Thames Barrier Project in the mid 1970s and from there moved on to building hardened aircraft shelters in East Anglia – those being the days of a rather warm Cold War. On RAF Lakenheath, he was once observed nearly slithering his mini under the wheels of a taxiing F111 loaded up with tactical nuclear weapons. If nothing else, it would have been one helluva motor insurance claim and a sense of humour loss by the US Air Force. Later, he went to Nigeria for two years to build roads and see first hand what corruption can do to bring down an intrinsically prosperous country. There he had his first experience of seeing British overseas aid being wasted. He returned to the UK and attempted to write a novel, but was instead diverted into bird ringing and spent far too many nights chasing radio tagged Nightjars around Wareham Forest at dangerously high speed. By a mysterious route, then fell into farming via six worn out commercial hens; and wound up with a flock of 350 Dorset Down ewes and forty Traditional Hereford cattle. He then divorced, changed his life and arrived in Cornwall to find solace in the pedantry of hard data, wonderful pubs, good people and writing. His other interest include walking; some very poor quality photography; the philosophy of consciousness as it pertains to animals and humans; and a certain amount of politics. David’s writing can be found here.