The gentle horse roams silently in the paddock while softly swishing her tail, two mouthfuls of grass are grazed and a hoof moves forward creating a steady rhythm that is soothing to watch. It’s a beautiful autumn day and a Red Admiral carelessly surfs the soft warm breeze. At least that’s how I like to remember this day, the reality is not quite as poetic. It’s an autumn day and there may have been a butterfly, a moth, maybe a few dung beetles kicking about.

My horse catches my eye because she is behaving peculiar. Her head carriage is relaxed, which somehow makes this even worse, and she is twisting her front right leg on the spot in semi-circular motions. Of course, I go over to investigate and she doesn’t move, I also see nothing on the ground in the vicinity of this one hoof. The semi-circular motions continue and it’s quite a bizarre sight! I push against her to encourage her to move but she stands her ground so I reach down to pick the foot up. She resists me, but after a few pulls I have lifted the hoof and underneath… I see fur. At best, I think it’s a patch of rabbit pelt, the remnants of a meal from a fox or kite. But as I lift the fur it’s heavier than expected, in fact I soon discover it’s an entire rabbit. My horse has pummelled this poor creature into the ground, and she has done it without a care in the world.

But our gentle equine friends don’t kill, do they?

I was enjoying a steady canter on this mare through an open field, my only other companion being my faithful Labrador who would run alongside us effortlessly. We must have disturbed a hiding fox as suddenly one darted out in front of us, to which my dog took off in hot pursuit, unfortunately…so did my horse! She quickly outpaced the dog and I had to scream at him to get out of the way. Rather than being trampled he barrelled sideways down a ditch. It was too late for me to stop this rather bizarre ‘bolt’ as I had already been at canter, I had already wasted a few precious seconds trying to save the dog and I had never even for a second anticipated my horse would chase a fox. My mare’s head carriage was very low, rendering the bit useless. Her nose was 2 inches from the floor and 6 feet behind the terrified fox. Her ears were pinned flat to her head and she was without a doubt either going to sink her teeth into this fox or strike out. Eventually the fox used the same tactic as my dog and I lost sight of it as it also barrelled sideways down a ditch and disappeared into the undergrowth.

Other incidences of my mares murdering ways involve squishing rats in her stable and chasing dogs out of her paddock. 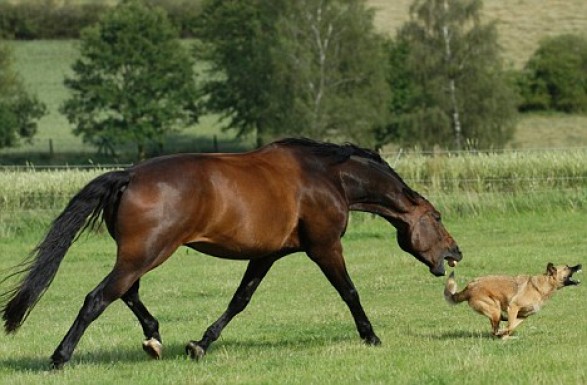 In all seriousness, it isn’t just my horse that kills, all horses can kill. In fact horses are somewhat formidable killing machines. But the horse is a ‘prey animal’ you may be thinking, maybe…for a lion. This term gives people the idea the horse is defenceless and will run away from anything. This couldn’t be further from the truth and horses will quite often stand their ground. A stallion will protect his herd, a mare will protect her foal, and these are the same instincts that are alive and well in that horse that stands in the stable eating hay.

I can understand my horse probably recognised the fox as a predator, perhaps she saw me and the dog as part of her herd, and she is without a doubt a dominant mare. Rats are creatures that scurry around her feet and perhaps she’s been nipped, perhaps not, maybe she is being territorial…perhaps she just doesn’t like rats! The killing of innocent rabbits in the field has me scratching my head however, is she protecting the limited resources or is she being territorial or both. It’s tempting to think she was just being aggressive for the sake of it, but animals rarely expend energy for absolutely no reason. Also when I saw her stomping the rabbit none of her body language exhibited aggression, she looked very calm in-fact. …answers on a postcard please.

I have never seen evidence that any of the animals she has killed have been consumed, not played with, or even chewed. I have only once witnessed a horse picking up a dead bird and began eating it. I will never know if this horse intended on swallowing the bird as the owner (understandably) removed the bird from the horse’s mouth. Although I have seen a video of a horse eating chicks and its uncomfortable to watch. The video shows dry dusty ground that is depleted of grass, so perhaps the horse has no choice but to eat them in order to survive. There could be evidence of miss-management in this case because rather than remove the horse to grass, or provide hay, or indeed save the hapless chicks from being consumed…videoing of the event was seen as far more important.

Deborah Jane Nicholas has been around horses for nearly 40 years and has worked within the horse industry in a number of roles. Deborah’s other passions are her 2 dogs, countryside walks and writing, which she does here.