Well done to those people that actually get off their backsides and look for work. I regularly see these adverts pinned to the notice boards of tack-shops. I applaud those individuals that make the effort to either hand-write or print off a carefully written advert and drive around the shops in a bid to find employment.

Still, there is also an error in many of the adverts, as straight after the opening eye-catching title it will say I am 19 years old and have been riding since the age of 4. Well, as much as I hate to be the bearer of bad news, riding for 15 years does not make a person an experienced groom. If the author has grown up on a yard under the supervision of an experienced horse professional, then yes, probably in this case they may be an experienced groom. But those individuals are rare. My main beef, if you will, is that people assume that because someone has riding skills, they will make a good groom. The person that rides will also assume they will make a good groom. Most of these adverts generally only include riding experience, and that they are actively seeking work as a rider.

But are they looking for work as a rider only? If so, that is fair enough, but the advert should state this, and not include they are an ‘experienced’ groom.  Too many times now I have heard of cases of grooms complaining they have been asked to muck out, bring in the horses, rug up and turn out, make feed’s, pick the feet out, even tack up, or God forbid…actually sweep the yard. Obviously at some point these individuals must have been led to believe that being a groom means having a tacked up horse presented to them in order to ride for 30 minutes.

Someone that only wants to ride may want to think of advertising themselves as an experienced jockey, or even a trainer instead, as that seems to be more accurate. But most of these people won’t because that throws up a bunch of questions from the potential employer. Who did they train under, have they raced, what level have they competed at, do you have a portfolio, when did you turn professional? Whoa! That all starts to sound very serious! But then if someone wants to get riding work, should they not be taken seriously, should the owner of the horse not be checking their credentials?

So in most cases using the title of groom seems a safer option. Yet being a groom is a very hands on job. For those that only have riding experience then it could be downright dangerous. An experienced groom will have worked in all sorts of places and environments, with many different types of both horses and people. Personally, I would not call the number on an advert that only includes riding experience.

I would prefer an individual with the knowledge to look at a filthy bed in the morning and identify there may be a problem with the health of the horse, and if  a horse is lame from half a mile away, and not just by trotting it up half a dozen times…on concrete. Also someone that doesn’t dismiss a small cut when in-fact it’s a life threatening puncture wound, and doesn’t think the horse is being silly when its staring at its belly. Someone that doesn’t just book the farrier when a shoe is missing, but is likely to retrieve the shoe and the nails from 6 inches of mud, rather than let another horse get wounded. I would need a knowledgeable, competent person. Therefore the advert would be dismissed because it only includes information pertaining to riding experience. 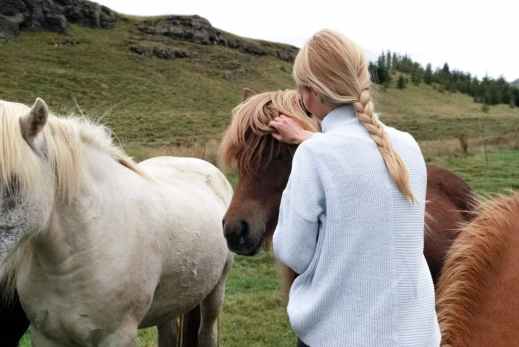 The term groom should be treated with respect because this is a person that has gained a multitude of skills, and not just with horses. Grooms become experienced in business and in dealing with other equine professionals, liveries and the public, shows, events and marketing, they deal with both pleasing and harrowing situations, they administer drugs and can identify illness and injury. There are exams to sit, lorries to drive and trailers to pull. They must be aware of safety regulations, equipment, tack, feeds, field and stable management. Most are pc literate, have built and run the yard website, can use editing software to construct adverts, can use power tools to fix fences, stables and yard equipment. The list is endless and I haven’t done it justice. Therefore to actually become an experienced groom is a long journey of gaining knowledge and skills. So someone that advertises they are 19 years and only wants to ride should rethink calling themselves an experienced groom.

Grooms are underpaid and overworked and most do not get the credit they deserve. But I remember a time when they were held in high esteem. Although it’s a distant memory from decades ago. I recall the first ripples of grooms leaving the horse industry, then it became a wave. Regarding all the skills I just listed, it isn’t hard for a groom to change career. Over time horses have become widely accessible, with more people having disposable income. Farmers gave up trying to farm, and who can blame them, and they turned to offering livery instead. More stables, more yards, more horses…more grooms? No, it’s not grooms the industry required, it wanted cheap labour to muck out all those extra horses.

Yet the title of Groom lingers on.

Yard-hand would be a more accurate description, and there is nothing wrong with that. At least a yard-hand knows they are there to perform the necessary duties involved in the daily running of the place, and are very much needed. In some cases yard-hands may have little interest in horses, but they are not employed for their horse knowledge, a groom is something else entirely.

Nonetheless as stated, I applaud those that actively seek work. If they are 19 years old and not sitting at home on the PS4 expecting the world to care for them, then their actions are commendable. They should strive to gain experience and work with horses if they so wish. Although they should not favour riding over everything else, because they are passing up the opportunity to learn so much more. Riding is such a small fraction of what goes on at yards and in the horse industry overall.

Only those that have dedicated their lives working in the horse industry and spent many years in the pursuit of gaining equine knowledge have the right to make an advert which is titled Experienced Groom Looking For Work.