The blood curdling screams tore through the air like a hot poker being driven into fresh snow and exceeded the sound level of a glacier calving off the Antarctic Peninsula. If those screams had been heard at 2 a.m on a housing estate in Milton Keynes the police would have been called, an ambulance…heck, it would have warranted an armed response. But there was no reaction from the 30 something people that were in close proximity to this woman. Was she on fire, or was she witnessing the skies ripping open to reveal Jesus and the 4 horseman of the Apocalypse?

No she was experiencing a downhill, 30 mph flat-out gallop with the The Kimblewick Hunt. This screaming woman was behind me, as nearly everybody was considering I was riding the fastest pony ever to exist in the entire history of the planet. My 3 ring gag was about as much use as a sandbag used to hold back a tsunami. Even years later I am on occasion still jolted awake by the sound of the Master shouting “If you can’t control that horse you will go home!” 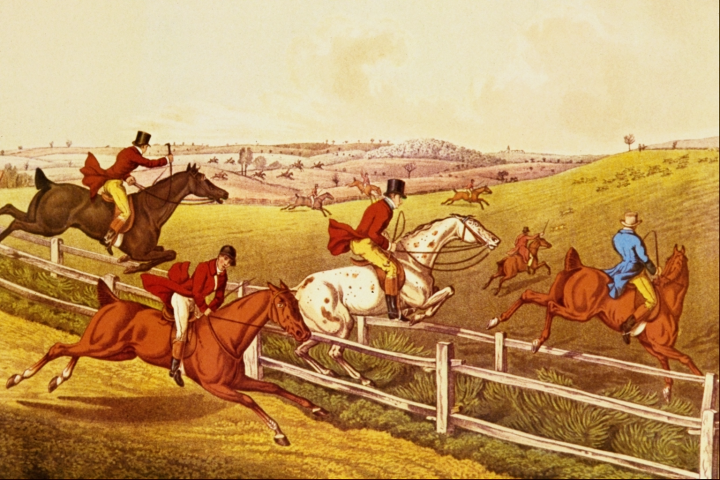 I do not turn my head to the sound of the terrified screams because things are going well for me. At least I tell myself that if my hearing is still intact I am therefore still alive. I daren’t move a muscle because in these situations ‘that image’ always pops into the equestrians head. Yes, you are in the midst of a flat out gallop and you imagine the horse tripping. It becomes apparent my nightmare pony has a plan to keep us both alive, for at the bottom of the hill is an open gate. If this had been a Sunday afternoon stroll with the labrador, this innocent looking gate would have proved no threat what so ever. But unless the laws of physics could be miraculously re-written in the next 20 seconds, 30 horses passing through this gate would be the equivalent of a speeding elephant trying to successfully negotiate a cat-flap. As we both passed last year’s winner of point to point (easily) while simultaneously committing the cardinal sin of passing the Master, we both pass through that opening unscathed. Well nearly, my ears stung quite considerably at someone shouting, but I hastily reassured myself that the person ‘who should go home’ wasn’t me.

We pull up and look back, and its carnage. Knee caps have been removed and indeed it’s now apparent it’s the Master himself that needs to go home. Well technically he needs a hospital and 6 months bed rest. He’s not alone either as I spot various people that have been ungraciously torn from their horse by every hunter’s worst nightmare…the fence post. There are even stirrup leathers and irons now adorning both posts. Hunters are sensible people and we always know how to react in such harrowing situations, yes we break out the whiskey and fags.

Theresa May has recently declared she would like to lift the ban on hunting and that she will renew the Tory pledge to hold a free vote on overturning the ban. This will undoubtedly upset various animal rights groups. Admittedly politics isn’t my cup of tea and I am happily perched on the fence over this, and can actually see reason in both arguments regarding ‘for and against’ hunting. I have seen a hare killed once by the hounds and the entire event of this animal departing our gracious planet lasted approximately 2 seconds. From half a mile away it resembled a hurricane of hounds dancing in a dust-bowl, and then it was over. The animals ate the hare and it would have barely been a mouthful each. The articles I have read depicting hunts chasing a terrified fox relentlessly for 3 hours was something I have never experienced.

Animal right activists may even gain a little comfort in knowing what the average hunter experiences out in the field. A small number of riders leave after the opening meet, more leave after the first hour. Add to that those that retire early when losing a shoe, and those riders that get lost or left behind. I can assure you 4 people will fall at the first hedge, another 3 will be wiped out by a fence post, and another 6 will be terrified at that downhill gallop. 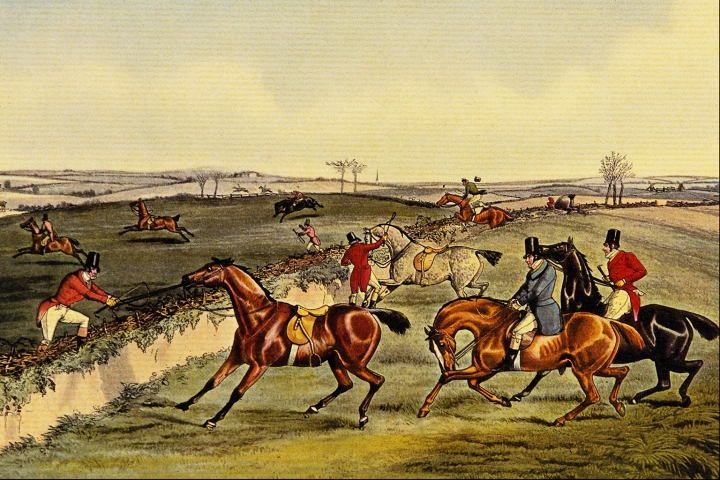 Talking of which, what did happen to the screaming woman? After the whiskey and fags, and mopping up of various ungraciously dismounted folk, and bagging up an assortment of knee-caps she was last seen walking up a country lane toward the direction of her horse-box. Was she ever seen out hunting again? No.

Deborah Jane Nicholas has been around horses for nearly 40 years and has worked within the horse industry in a number of roles. Deborah’s other passions are her 2 dogs, countryside walks and writing, which she does here.