Is there anything the far left love more than doctoring history? From the holocaust and The Great Purge to 9/11 and the 2017 general election, give us a documented event that messes with our narrative and we’ll move hell or high water to pretend it didn’t happen that way. And if hell or high water refuse to budge we’ll take a metal pole to them until they darn well do.

But brave US leftists have recently taken this one step further – erasing history entirely by destroying statues of dodgy historical figures before they come to life and start attacking minorities like that skeleton out of Clash Of The Argonauts. And it’s not over yet, with exciting plans to topple more inanimate objects nationwide that regularly threaten the 1% of Americans too feeble to accept that people from the olden days weren’t quite as liberal as the average Guardian contributor. (Unless that Guardian contributor is Tariq Ramadan or Seumas Milne, in which case the slave-owners and confederate soldiers just about shade it.)

Luckily, Britain has more foul monuments than you could shake a bloodstained bike-lock at. And I’m not just talking about the Tories and war criminals dotted around Westminster. They’re vile, sure, but when Jezza eventually takes power they’ll be taken down quicker than Jess Phillips. No, this entire godforsaken country is littered with problematic statues every bit as triggering as an Abraham Washington or a General Custard.

Hence this handy list of the very worst in Britain and Europe, which will hopefully inspire my army of readers to hysterically assault lumps of broken marble as if they were the zombified body parts of Hitler and Donald Trump. And, as you’ll see, my investigation unearthed some stateside abominations that have thus far slipped the Antifa net. But first:

Since his death the World Cup Winner and former Tynecastle striker has been fondly remembered as a kind of cuddly fairy godfather. Don’t believe a word of it. Because despite getting into hot water in the ’80s when he insulted stupid people everywhere by calling Geordie superstar Gazza Lineker ‘daft as a brush’, Robson never learnt a thing. Not only did he go on to deprive a foreigner of work by taking the Real Milan job, it has also been revealed that whilst Penguins manager he regularly got Franz Ba and Romelu Lua Lua mixed up.

That a stone tribute to this animal stands on Barret Road terrorising people to this very day is a stain upon the north-west. TEAR IT DOWN.

For decades he brought joy to millions as one half of the double-act behind ITV hit Cannon & Barker. However, these idiots were blissfully unaware of his dark secret. For not only was Barker a closet Tory, he also has a first name which is uncomfortably evocative of Erik Von Kopperberg, a Nazi I think I once read about.

That the seaside community of Margate saw fit to vandalise their promenade with a statue of this rotten hooligan should shame everyone stuck in the last century who still thinks it’s perfectly okay to vote Conservative or share your name with an imaginary fascist. It’s not. TEAR IT DOWN.

Another comedian, another Tory. What is it with these ‘funnymen’ and their pig-headed belief that they can vote for whoever they like? As well as being a serial tax-avoider and wielder of sexually aggressive cleaning tools, what is less known about Dodd is his shameful former career as a slave-trader, spending years forcing retarded adults to toil for a pittance at the Knotty Gash workhouse in Manchester.

Few left the concentration camp known as the ‘Chip Butty Mine’ alive but I’m sure those who did are delighted to walk past the buck-toothed brute who imprisoned and exploited them every time they drag their bruised bodies across the city’s Lime Road station. TEAR IT DOWN.

He’s doing a Hitler salute. TEAR IT DOWN. 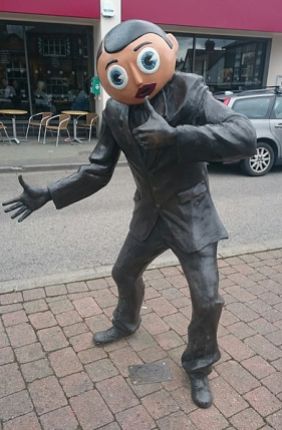 There are few things that rile the modern left more than minorities not doing as they’re bloody well told. And nothing encapsulates this ungratefulness better than a man born with a papier-mâché head swanning around the world, forging a successful career and at no point pleading victimhood. Sideparting was handed the keys to the top table and blew it. And the fact that he did so while currying favour with the establishment by publicly humiliating miniature Franks suffering from the same papier-mâché head affliction is horrendous.

I hope you enjoyed your time in the Big House, Sideparting. It must be great for the papier-mâché head people of Liverpool to be assaulted by your self-hating features every time they stroll down Tipperary High Street. TEAR IT DOWN.

You’d think Brussels would be the last place you’d find sexually aggressive statues of misogynist five-year-olds slashing in women’s faces but what can I say: welcome to 2017. That the home of the EU – the birthplace of tolerance – is no longer immune to such patriarchal mind-violence speaks volumes about the sickness infecting the West. The sooner someone strikes a blow for decency and pulls this boy’s brass c**k and balls off with their teeth the better. TEAR IT DOWN. 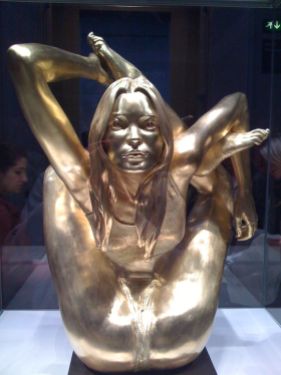 As if forging a career out of objectifying herself and shagging dead rock stars wasn’t vile enough, former Miss World Moss had to aim even lower and offend dogs and contortionists everywhere by appropriating their natural ability to sniff their own arses. That her deeply triggering statue was then paraded around the world for rich perverts to drool over is sickening: rumour has it a certain orange-tinged p***y-grabber had a replica made just so he could fashion bath-taps from her fanny-bone. Meanwhile the RSPCA has to deal with the unglamorous reality of canines sniffing their own arses everyday. And the number of circus performers driven to suicide by the lack of opportunities for non-super models to utilise their auto-arse-sniffing talents is through the roof. Not that any of that bothers Moss. TEAR IT DOWN.

(Kings’ Cross, 1955) ‘Come on, Julie’ said Mr Bowen. ‘Let’s have a good laugh at that immigrant in the silly hat and duffel coat. He’s from Jellystone Park, you know? What’s that? He’s got muck all over his fur? Well, he would wouldn’t he. He’s an immigrant!’

‘Daddy’ asked Joey. ‘Wouldn’t it be great if 50 years from now they erected a statue of him in this station so everyone can do what they always do to immigrants and point and laugh at him for smelling like honey?’ Daddy laughed. ‘You’re not wrong, son. What’s that, Julie? Why’s he not wearing any trousers? Because he’s an immigrant! Yes, you’re quite right, it would have been less humiliating to just shoot him on page one. Never mind. Come on, kids – let’s throw some nettles at him’.

As if insulting African-Americans by eulogising a man who turned himself white wasn’t macro-aggressive enough, depraved LA artist Dean Koons sunk even lower and offended the entire animal kingdom by adding The Purple King Of Pop’s pet monkey-thing, Pebbles. That this gruesome pair then toured the world for the amusement of privileged Caucasians while blacks worldwide were left to rot is a stain on humanity. And don’t get me started on the monkey-thing population who barely know how to tie their shoelaces never mind wear gold trousers or shoot people.

‘I don’t care if you’re ebony or ivory’ sang Prince on his 1982 smash Hello. Well, thankfully some of us DO care, mate, though it was nice of you to clarify which group you identify with. Rest assured, if this abhorrent monument to toxic whiteness and animal cruelty ever rocks up in Britain it’ll be smashed to fucking dust quicker than you could down a pint of Jesus Juice at Nevermind Ranch. TEAR IT DOWN. 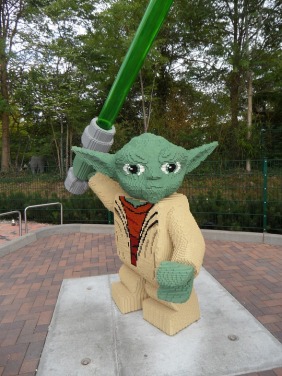 Brando Calrissian aside, the Star Trek universe is a filthy hotbed of white privilege, and no amount of Asian aliens or queer robots will change that. However, the most heinous Uncle Tom has been hiding in plain sight throughout the whole saga in the form of pint-sized Jihadi knight Lord Yoga. Not content with repeatedly trying to kill Dark Vader – the only truly black character in Eternia – this brazen turncoat happily sold out his own people by straying from his lane and kissing the hoops of decidedly un-green normal-sized spacemen. And if that wasn’t problematic enough, in crap sequel Return Of The Phantom he disregarded the feelings of disabled sci-fi fans worldwide by leaping out of his wheelchair and braying several able-bodied six-foot Klingers.

But his reign of terror still wasn’t over. As if offending the green dwarf community wasn’t unforgivable enough, Trek creator JJ Binks rubbed further salt in their wounds by erecting a statue of Yogi made out of stickle-bricks at the Starbuck Ranch in Nevada. Jesus, JJ, why not just put up a statue of Chewbaccy too so all the dogs in the audience who can’t talk or fly magic helicopters feel even more worthless and suicidal?

Oh wait, you already have. 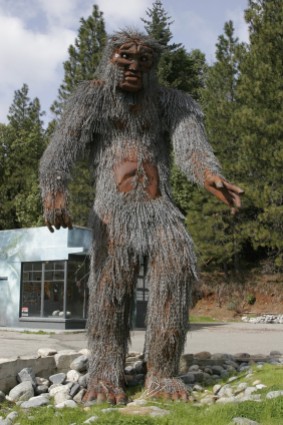 Grim stuff and unfortunately the mere tip of a very large iceberg. But we’re getting there and I personally can’t wait for every last speck of awkward history to be eradicated completely so we can start afresh from Year Jezza.

Though it’s worth remembering that not all statues of historical figures need to be pulled down, called names and spat on. On the contrary, it’s arguably now even more important that we preserve the GOOD monuments depicting the likes of Stalin, Lenin, Mao and Castro. (Or at the very least give them all a fresh lick of paint.)

As for the future, I propose that all of the statues listed above are toppled, shat all over and replaced by life-size replicas of Jeremy Corbyn. In fact, why bother with replicas at all when we can hire lookalikes dressed as the Dear Leader to stand rigid 24/7, oozing cool like geriatric Queens’ Guards on dress-down Friday? And don’t worry, in case of emergency armed Momentum sharpshooters will be positioned nearby ready to open fire if any of the clones so much as sneeze.

Also, if erected in areas with a high concentration of pigeon activity, the Jezza-ringers will gain a valuable insight into the mind of their idol by knowing exactly what it’s like to be smeared with shit. A small price to pay for the honour of representing Britain’s Greatest Prime Minister. And should the sight of an immobile, beret-clad actor covered in bird-poo prove too micro-aggressive for the snowflakes of the future, well, they know what to do…