Have you ever thought you knew a place, looked away for a moment, and when you look back it’s changed?

Have you ever had that happen for an entire country?

I hadn’t – not for a whole nation – until just now, when I looked at Britain and saw the most bizarre of infernos taking hold.

It appears that Britain has been laid with tinder, and Member of Parliament Boris Johnson, with the very tiniest of sparks, has set the whole place ablaze.

As a recap, Boris (one of those rare political figures who is known by his first name alone) wrote a newspaper article defending the right of Muslim women to wear niqabs and burkas. It was not a dry legal analysis, but an opinion piece, and he included in it some jokes. His point was a liberal one, that Denmark had made a mistake in banning the wearing of face coverings in public. While defending the right to wear the burka, he made it clear that he had no affection for it, calling it “oppressive and ridiculous” and comparing the appearance of its wearers to “bank robbers” and “letter boxes”.

So, one defence of the burka, two jokes, and a media/political meltdown.

Boris was, as is par for the course nowadays, labelled a racist and an Islamophobe, accused of stirring up hatred, and generally set upon by the mob.

The situation has dominated the news and social media.

And let’s just reiterate: one defence of the burka, and two jokes.

A lot of people scratched their heads in bewilderment, but the maelstrom raged on, and you could have been forgiven for doubting your own sanity. The burka is, quite clearly, oppressive and ridiculous. And not only that, it represents a thoroughly illiberal and extreme faction of Islamic thought. It most definitely does not represent mainstream, moderate Islam.

In Iran, women are exhibiting the most incredible courage in order to be liberated from theocratic control, as they did forty years ago.

But back in Britain, people are looking around and asking themselves, didn’t poking fun at and criticising religious fundamentalists used to be perfectly acceptable?

Well, thankfully Twitter came to the rescue, and reminded us that yes, not five minutes ago it was completely normal, across the political spectrum.

If Boris Johnson is guilty of anything.
It's nicking gags from Stephen Fry and the Have I Got News For You team. pic.twitter.com/zAToah7WGm

So Warsi is attacking @BorisJohnson but made these comments. https://t.co/GvlxR2isPg Bit bigoted to try and put your morals into other people. The hypocrisy is astounding.

A few days after Boris’ article, actor and comedian Rowan Atkinson decided to intervene, in the form of a short letter to The Times, which then also became a major talking point. It’s notable that when Atkinson gets involved in politics, people listen, perhaps because he so rarely does comment on politics. Additionally, he’s non-partisan and consistent in his defences of free speech and the right to blaspheme.

We were also treated to the news that one hundred burka and niqab wearing women, along with Conservative peer Mohamed Sheikh, were demanding Boris be  removed of the party whip. To which the only sane response can be: no, sorry, we don’t punish blasphemy.

And there were strong statements in support of Boris from Imam Taj Hargey, and Qanta Ahmed, writing in the Spectator.

As a Muslim woman, I’d like to thank Boris Johnson for calling out the niqab says Qanta Ahmed https://t.co/B3bvZhMUgr

Over on Twitter, the nominally liberal mob were furious with Rowan Atkinson for holding the same authentically liberal opinions he has always held, but he had outsmarted them by not being on Twitter. Presumably there will soon be demands that he be forced to sign up to the hellish social media platform in order to that he may be properly shouted at.

And there was a remarkable pronouncement by Guardian columnist Jonathan Freedland, who stated, with reference to “the Tories” and Ahmed’s Spectator piece:

“Doubtless, they could find a handful of unrepresentative Muslims on the fringes who will tell them that Johnson actually made a rather good point.”

So that’s a highly privileged, non-Muslim, left-wing man ruling that the opinions of Muslim women–on a matter that directly affects Muslim women, and which is specifically concerned with female oppression, theological intolerance, and actual patriarchy (not the third wave/Laurie Penny kind of patriarchy)–are to be disregarded without consideration, because they happen not to align with his political leanings.

This is beyond offensive and supports the notion that #Muslims practice a monoculture. It's also normalising ultra regressive Islamic practices. The new Muslim orientalism. https://t.co/lBzFt9SJRO

There was also a peculiar, second phase contortion to the Boris bashing, which attempted to condemn him for blasphemy while maintaining for oneself the right to blaspheme. 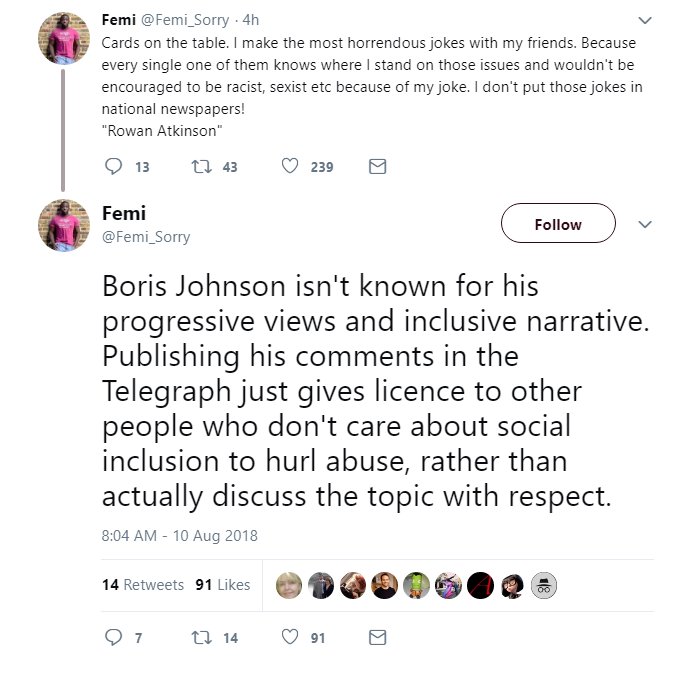 In other words, we’re Good People, and therefore when we make jokes, they are simply that: jokes. But Boris is a Bad Person – a Conservative, a Brexiteer, a schemer– so when he makes jokes, well, that’s a different matter.

Besides the childish double standards, damning someone for the intentions behind a joke (as ascribed by the accuser, with zero evidence) is, in the end, exactly the same as just damning them for the joke itself. The only difference along the way is that you reveal yourself as being comfortable with finding people guilty of thought crimes.

And speaking of crime, if all this wasn’t dizzying enough, there was the following statement from Met Police Commissioner Cressida Dick:

“I spoke last night to my very experienced officers who deal with hate crime and, although we have not yet received any allegation of such a crime, I can tell you that my preliminary view having spoken to them is that what Mr Johnson said would not reach the bar for a criminal offence.”

That this should even require saying, and that there was an exchange between senior police officers to discuss the matter, should set off alarms about what kind of a state the UK is becoming.

Are people, particularly those on the left, really prepared to trash freedom of speech and conscience, in order to make short-term party political gains?

Is it acceptable that hate crime regulations are steering the country toward outlawing blasphemy by a different name?

And how did this strange revolution occur so quickly? Because make no mistake that it’s real: behaviours, speech, and thoughts that were perfectly normal just moments ago are now being categorized as some variety of moral crime, and perhaps even as a police matter.

After publicly tearing off their hijabs, Iranian women are now on the roads, dancing like there is no tomorrow. This is illegal as per the Islamic laws, prevalent in Iran but who cares! Retweet if you love their moves. pic.twitter.com/zklAKXt1U1